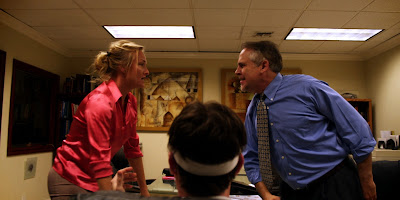 Synergy (USA, 2010, 6:42, dark comedy, Red Camera, color)
The regional sales manager Amelia Lockheart expects a big promotion, after working hard in the merger of the company. She disputes the position with her coworker, Constantine Matters. The competition intensifies when they get stuck with a stranger in a conference room.

Maybe because I used to be an economics reporter, I preserved the bad habit of reading business news. Yes, call me a freak. And in one of my excursions, I read an interview with a CEO about corporate synergy. He was presenting the advantages of a merger, which keeps the best of each company and eliminates duplicate sectors for more effective results. Nothing more logical, except for one detail: companies are made of… people!

Then, at that point, I committed my second bad habit: putting myself in someone else’s shoes. I asked what I would do if I had to dispute my position with a colleague in a merger. How far would I go to secure my job in a company I always dedicated myself to?

Also: isn’t the competition an antithesis of the whole synergy concept? And in a broader perspective: is it possible to have synergy between the aspirations of an individual and the goals of a corporation? These are the questions that permeate SYNERGY, a character-driven dark comedy in a classic storytelling style.

We wouldn’t have succeeded if not for the tremendous passion of the whole team, especially the wonderful actors and the talented cinematographer. They made this project happen with their valuable contributions. It’s been the perfect synergy! So I hope the audience has as much fun in seeing it as we had on making it.

This film was my final project of an eight-week workshop at New York Film Academy (LA), with a super short-term deadline. So this project could also be called how-to-make-a-film-in-seven-days -- which was exactly the period I had between writing the first draft and the wrap of the shootings. That means we scouted for a location, assembled crew and equipment, plus did casting and rehearsals in five days. Then, we’ve spent two more days filming (16 hours total). And I had the time of my life.

Hand truck as a dolly for the final scene – "Since we had almost no budget, I borrowed a garden hand truck from a neighbor. It worked pretty well as a doorway dolly on the final scene, even without having the appropriate tracks." - Gabriela Egito, producer/director

Happy ending for missing sound files – All sound files from the initial sequence mysteriously disappeared. Only one take that would be used for cutaways was recovered. At the editing room, we realized it worked by itself in an artistic way for the opening credits.

Minimal crew on set – The crew on set consisted of five people: producer/director, line producer/AD, DP, gaffer, boom op/mixer. We also had a makeup artist. It was roughly the same number of actors in the cast.

A Red as the equipment – The whole equipment was a Red Camera (rented on a buddy price), an old-almost-falling-apart tripod and a sound mixer with boom mic. The only scene in which we use lighting (a taco) was the one at the window. The rest of the film was shot only with practical lights.