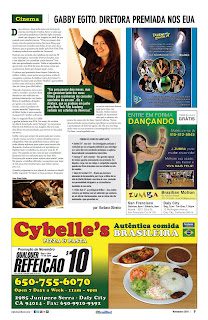 "I came just to spend two months, but they liked my films so much they decided to grant me a merit-based scholarship for a year," says the director, who graduated in June from the New York Film Academy based in Universal Studios."

Two nominations and two awards at film festivals in the United States. That is the balance of what Sao Paulo journalist Gabriela Egito has achieved since she arrived in Los Angeles in April of past year to study filmmaking.

“I came to spend two months, but they liked my films so much they decided to grant me a merit-based scholarship for a year,” says the director, who graduated in June from the New York Film Academy based in Universal Studios.

During this period, she worked in more than 50 short films, in several positions, but her goal is to become a professional director. “It's been a huge learning. I have the feeling I already live in the U.S. for years, so many things have happened since I got here,” she says. 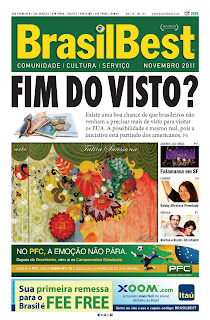 The effort has produced good results. Gabriela, or rather, Gabby, as she signs her projects, has been awarded the prize for Best Short Drama (15 minutes or more) with her film “Stuffed” which also received a nomination for Best Short Actor (Phil Miller). “When they called my name, it was hard to believe. It already felt too good to be nominated for awards along with many great films directed by seasoned professionals, as the producer of the worldwide box office 'Home Alone'. So, it’s a memorable feeling”, recalls the director.

This is the second movie of Gabby winning awards in the U.S.. In May, she received a Merit Award for the short film “Synergy” at the Awareness Film & Arts Festival in Los Angeles. She has two more films in post production, to be launched soon.

Gabby has always been in love with movies and as a child she used to write and tell stories to her friends. But she never felt she had enough talent to pursue such a competitive career. She ended up majoring in journalism and worked in the Espirito Santo state for over a decade. “That's when I realized that financial stability was not enough to make me happy. I needed at least to give it a shot,” she tells. So she worked twice as hard and saved money for more than three years. Then she sold everything she had and left to LA.

When asked if she has plans to go back to Brazil, Gabby says, "The future belongs to God. As long as the doors are open for me here, I'm staying. I am immensely proud of representing my country and showing our way of making movies,”, she says. "I am developing new projects to film next year and participating in festivals now," she says. She has a blog where she tells her cinematic adventures in the land of Uncle Sam: www.brgirlinla.com

• Stuffed (15", neo-noir) - A private eye is hired by an arrogant advertising executive to investigate whether his partner is stealing from their agency, triggering unforeseen consequences.

• Synergy (7", dark comedy) - A female regional sales manager disputes a promotion with a male coworker. The competition heats up when they get locked with a stranger in the conference room.

• Taken for Granted (12 ") - Drama that incorporates elements of documentary to trace the last day in the life of Martha Michaels, a housewife, revealing her intriguing personality and the unusual circumstances of her death. (In post-production)

• The Killer Date (7 ", psychological thriller) - A woman has a series of phone calls with an admirer who she met on a social networking site, but things are not what they appear to be. (In post-production)
by Unknown às 12:07 PM