The trip was smooth but too long. More than 20 hours from Sao Paulo to Los Angeles. When I finally arrived on Dallas, after a 10-hour flight, I've been informed that my next flight have been cancelled. So American Airlines booked me to another one, two hours later. 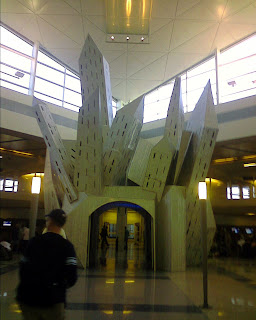 It's sad that a country has to be so concerned about security, isn't it? How can you get so much enemies? Americans should think about it. Nobody is a victim out of nowhere. I had to take off my shoes so they can examine them! It's a new carreer: foot odor checker! Applications are open!

Dallas Fort Worth international Airport is a little bit boring. Just a bunch of expensive stores that sell stuff like french perfums and bottles of whisky (wich you can acquire for half of the price at a duty free shop).

Texas always seemed to me, let's say, a little cheesy. And to prove my theory, DFW has a multimillion dollar Public Art Program. Check one of it's centerpieces (the picture I took from my mobile). Financing art is cool but this monument... Well it's cool for a child like me!


PS: from now on all my posts will be titled in English with the Portuguese translation right after.
by Unknown às 10:07 AM